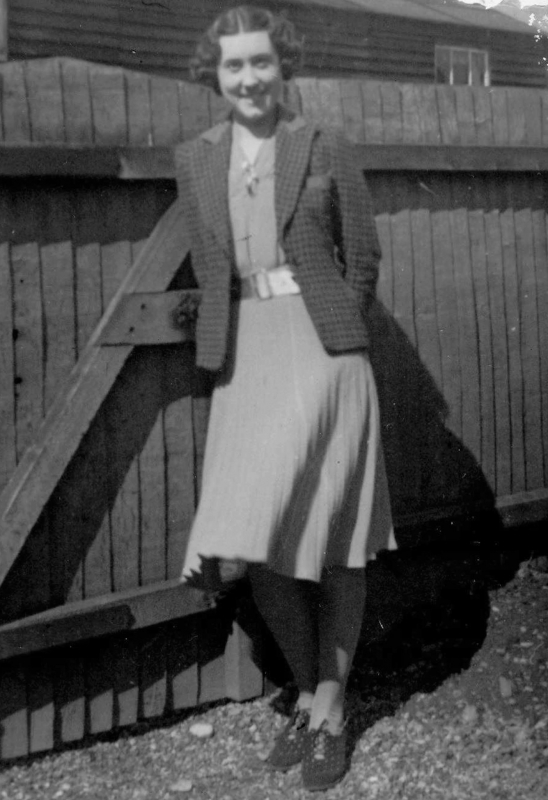 Extract from “Memoirs of a North Walsham girl” by Ina M. Madden.
Contributed by her daughter, Bridget Wilson

Mother was the youngest of eight born to Sarah Ann Mace nee Bargewell – born Bacton 26 January 1858. (She thought there were actually twelve children, but didn’t know what had happened to the others). Arthur the eldest was probably about 20 when Mother was born. He was so disgusted he left home, and if anything he wasn’t exactly the perfect son. Mother was born in a house in Happisburgh Road and being the youngest referred to herself as the ‘scrapings’. And because most of the others had lovely curly hair, and hers was straight. It had to be put in rags to get a curl. Besides her own children I believe that Granny brought up Alice Lavender Mace. Ickey as we knew her, as there some query about her parents, otherwise known as illegitimate. Granny was Aunt Sally to her. Every year Grandfather would hire a charabanc, (before my time) and took the whole family for a day to Weybourne. It must have been a full coach!

I think it was soon after this that Grand father started up the business – building. He converted a barn on Cromer Road into their house, which is still there today – the house in which I was born. During the war Mother worked in Cubitt’s grocery store, and also on the post, cycling out to surrounding villages. She loved doing this, a friend of everyone. I think the country people were very good to her, especially at Christmas time.

Uncle Horace was the next one in age, and Mother was closer to him than the other brothers and sisters. In bed (separate rooms) they used to sing to each other ‘Who killed cock robin’. It was a hard life in those days, no mod cons, TV, transport, etc. Her father used to set off at 5am, walk to Happisburgh (7 Miles), or other jobs he had – do a day’s work, walk home, in all weathers – snow and ice, etc. Can you wonder he turned to drink, mainly at lunch time, spending the rest of the day sleeping it off. I believe he died 1916, aged 61. For years Mother and I took flowers to his grave every week. I can’t find it now although granny was buried in the same one in 1942 (We have found the grave since writing – HH 7 & 8). The business g rew and g rew. All the boys worked for him, each doing a different trade – it then became William Mace and Sons. Gradually their sons, (my cousins) when old enough, also joined the firm. Apart from the North Walsham Steam Laundry, they employed more people than any other firm in the town. I can remember the time when there were 30 approximately.

On September 28th, 1918, Mum and Dad married in St Nicholas Church, North Walsham. Mum said it was at 8am so they had a proper wedding breakfast! She carried an ivory prayer book which I had for years until it finally fell to pieces. They must have started married life living with my granny, because I was born in her house on June 19th, 1919 – just a day after Mum’s 21st birthday. She said it was an extremely hot day – the only day in her life when she fainted. (Probably it was the sight of me!) Although Gran had 20 grandchildren for some reason I was her favourite. May be because I was born in her house and also Mother being young, just 21, I can imagine she didn’t like the idea of being tied to babies!

Dad was away in Scotland trying to get his job back, which he had prior to the War. It was in the Bank of Scotland. The rule of the Bank in those days was that before getting married you had to be of a certain age, and receiving a certain salary. As he was neither he didn’t get it. If he had, I just could not imagine Mum would leave North Walsham, family and friends, to live in Scotland. Dad came back and started work with Mace Bros as a painter and decorator. I expect there was a shortage of jobs after the War, as there was after the Second World War.

Life in the 20s and 30s was a completely different world from what it is today. Unemployment was high, no welfare state. However we lived in a caring society, at a leisurely pace. There was always a feeling of warmth about North Walsham (especially about belonging to a family who seemed to make up half the population). I think I must have been about a year old when we moved to Waveney Terrace. Sometime around this age I fell backwards on to the fire and burnt my bottom leaving an imprint of the bars of the front of the fireplace across it. Must have been painful! I think Uncle Horace must have still have lived at home then, he used to rock my cradle so I was told. Anyway it was a big double fronted house. Four bedrooms. Nothing on the floor – lino in the best room – but the boards were always being scrubbed – you could eat off them. Downstairs was the living room. A big table, sofa and two easy chairs, dining chairs, covered in black horse hair, rather hard. In the front room, the usual ornaments, bits of china, chairs and a piano. We used to strum away. A big pantry and a kitchen. This had an open fire, with oven attached. No bathroom, no running water. Candles for lighting your way to bed. Paraffin lamps downstairs. Outside was a big wash house. Here you heated the copper for hot water to the do the washing. Coal house, and outside lavatory. A pump near the back for water.