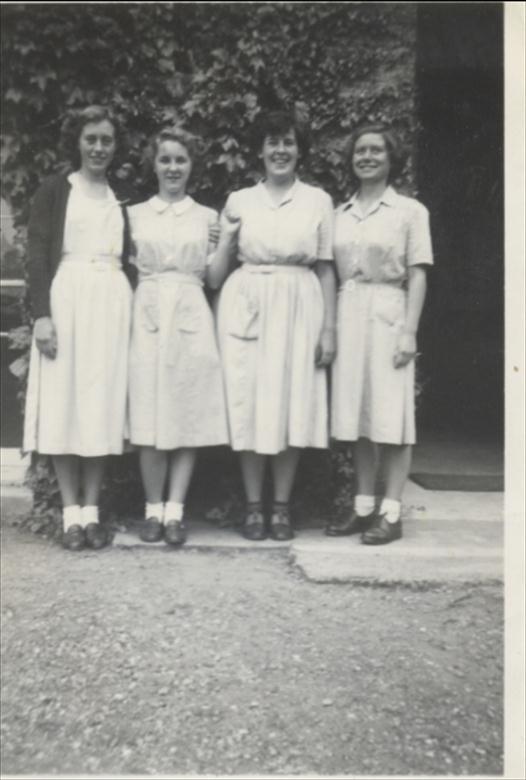 Going to school in North Walsham in the 1950s

I haven’t ever lived in North Walsham, but I went to school from 1952 – 1959 at what was then North Walsham High School for Girls.  I was the girl who lived furthest away from the school, just outside Holt.  I should have gone to Fakenham Grammar, but my parents didn’t want me to mix with boys, so they got me into North Walsham which was girls only. Years later my own daughters went to the school, it was so different for them.

It wasn’t easy getting to school, I left home on my bike about half past seven, left the bike at a house in Bodham, got a bus to Sheringham, then a train to North Walsham.  I got home again about half past six in the evening. It was grim when the snow was on the ground.  At the station we weren’t allowed to talk to the Paston boys, and on the train we had to travel in the same groups all the time, five, or was it seven, girls with a prefect in charge.  When we got there, we had to walk together in line.  There were two railway stations then, what is now the motorbike museum was where the trains to Mundesley went from.

We had assembly every morning, the whole school, except for three sisters who were Roman Catholics and not allowed to attend corporate worship.  That was the limit of diversity, all the girls were white and assumed to be Christian, I thought Jewish people were only in the bible till I was grown-up.

School dinners were strictly traditional, vegetarians and allergies not catered for, it was usually stew or mince, veg, and pudding, never chips. At morning break, a small bottle of cold milk, no fizzy drinks, snacks or chocolate bars. None of us were over¬weight.  Table manners were strict, we weren’t allowed to use our spoons to eat pudding, usually jam tart or sponge and custard, but had to use a fork.  If it was rice or semolina, the Head Mistress would stand up. We would all fall quiet, and in the silence, she gravely spoke “Girls, you may use your spoons”.

Uniform was navy pinafore dresses two inches below the knee, green and white striped blouse, knee socks or stockings made of lisle (a sort of thick pale brown knitted fabric), worn with suspenders, and flat black shoes.  I was once sent to the Head to be told off when I wore a slip underneath.

One of the ordeals of school was hockey practice, playing the game was bad enough, but the worse part was that we had to change at school into our shirts and navy knickers, and then walk through the town centre.  The games mistress wore tailored knee-length shorts, we weren’t allowed shorts, and there was no question of wearing trousers. It seemed a very long way from school by the traffic lights on the corner by what was then the Angel pub, through the market place, up past the present post office and library to the games field, which was on the site which is now the High School. Worst day of the week, with the whistles and comments from passers-by. Some of us tried to get out of games when we had our period, but that didn’t work.

Domestic Science was once a week, I well remember the first one:  we were taught how to scrub a wooden table.  After that we made ourselves an apron to wear when we moved on to cooking.  It wasn’t easy taking the ingredients to school and then bringing back the finished goods on my bike.  We were told that when we became house¬wives, we must plump up the cushions and empty the ashtrays before we went to bed each night.  Nothing was said about what might happen when we got to bed!  We didn’t do biology, it was physics and chemistry for the A stream, nature study for the B stream.

Our teachers were mostly unmarried women, but the history teacher was married. We learnt history through from the Romans to the end of Queen Victoria’s reign, nothing modern.  I remember the teacher for one session in our last year when we were 15 or 16. We had finished our exams, and she suggested a general discussion, was there anything we wanted to talk about. One brave girl put up her hand and asked why we had periods each month. So we had our first and only sex education lesson; she explained where babies came from, she glossed over intercourse (but later that day a friend filled me in). Some of us might have had a good idea of what it was all about, but I wasn’t the only one to learn a lot. It was the first chance we’d ever had to ask questions about this for¬bidden subject.

No career advice either, the brightest girls were expected to go to university, but most of us were expected to become teachers, secretaries, or nurses. I’d have loved to do technical drawing, but I didn’t know you could till it was too late. We were all expected to leave our job when we married. In spite of this, we managed to produce one cabinet minister! Most girls left at 16, others stayed on for 2 years in the sixth form to do A levels.

We weren’t allowed out in the town at breaks, but sometimes the prefects would let us call in at one of the sweet shops on the way back to the station in the evening; the one on the corner by the Angel sold broken crisps for a penny a bag, otherwise we mostly bought penny chews, flavoured with raspberry or orange.

The school motto was ‘Members one of another’, and now let’s finish with a rousing chorus of the school song, printed on my memory for ever:

Go forth with God
The day is now that thou must meet the test of youth
Salvation’s helm upon thy brow, go girded with the living truth.
In ways thine elder brethren trod, thy feet are set
Go forth with God.

Behold with thine uplifted eyes
Beauty in all that sorrow seems
And make of earth a paradise
The substance of the dearest dreams
Bring laughter to thy great employ
Go forth with God and find his joy!                   Then the first verse again.