Walker's Garage
Taken around 1910, this photograph shows Albert Walker with three of his children, Lucy, Harry and Cyril and an unidentified man in the rear, outside his Yarmouth Road property which he later rebuilt into the present two storey building that now, 2009, houses JB Postles TV and electrical shop and Tots 2 Toddlers.
Albert Walker appears in the Trade Directory of 1888 as a Grocer in the Market Place. In the 1900 edition he is listed as a Grocer and Cycle Agent in the Market Place, but, in 1912, whilst still appearing as a Grocer in the Market Place, he is also listed as a Motor Car Agent, Garage and Cycle Agent on Yarmouth Road.
The front two cycles are motorised and the front one has an engine where the letters M(?)INE(?)A are visible... The word is probably Minerva which was a Belgian built motorcycle engine made when similar engines were not produced in Great Britian.
The furthest door of the building is the entrance to the North Walsham Subscription Library and the notice beside it gives the opening times. On the far left of the picture is the entrance to the Cross Keys Yard.
The directories of 1912-1922 list the North Walsham Volunteer Fire Brigade, New Road, A.Walker, Superintendent and 11 men. This archive item has been viewed 2635 time(s). 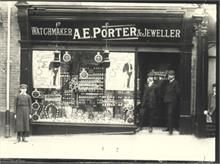