Queen Victoria's Jubilee Dinner, North Walsham
At a meeting on February 28th, 1887, at the Church Rooms, it was decided to celebrate the Jubilee of Queen Victoria by holding a dinner and sports for all the poor of the parish. It was also agreed that a tea be given at the Corn Hall for aged women who might be unable to bear the fatigue of attending the dinner and sports.

On June 21st, the weather was kind and over 2000 people at 36 tables, 50ft long, dined on cold beef, bread and pickles, accompanied by beer (a pint for each man and a half pint for each woman) and followed by Plum Pudding. Each table had a steward, 3 carvers, 4-6 waitresses and two beer carriers. Each group of helpers was distinguished by a different coloured rosette. 190 stone of beef was used at 8. 2d per stone (less than 3p per lb!). The recipe for the puddings was:- Flour, 3lb; Breadcrumbs, 3lb; Stoned Raisins, 2lb; Sultanas, 1lb; Currants, 3lb; Candied Peel, 1lb; Mixed Spice 1oz.; Sugar, 2lb, 12 Eggs, Suet, 3lb and a quart of milk. This was sufficient for 21lbs of pudding at 4d per lb. In preparation, 60 volunteer ladies attended the Corn Hall, for two days each, during the fortnight before the dinner, when over 230 puddings of 7lb each were made.

The puddings were boiled in coppers around the town and reheated on the morning of the Dinner. The Market Place was decorated with Chinese and Japanese lanterns, umbrellas, evergreens and flowers and music was provided by the band of L Company, 3rd Voluntary Battalion of the Norfolk Regiment. In the evening the Market Cross was seen to great effect."Illuminated , its lines picked out with coloured glass lamps, the soft effect enhanced by the foliage and the Chinese Lanterns festooned about it". 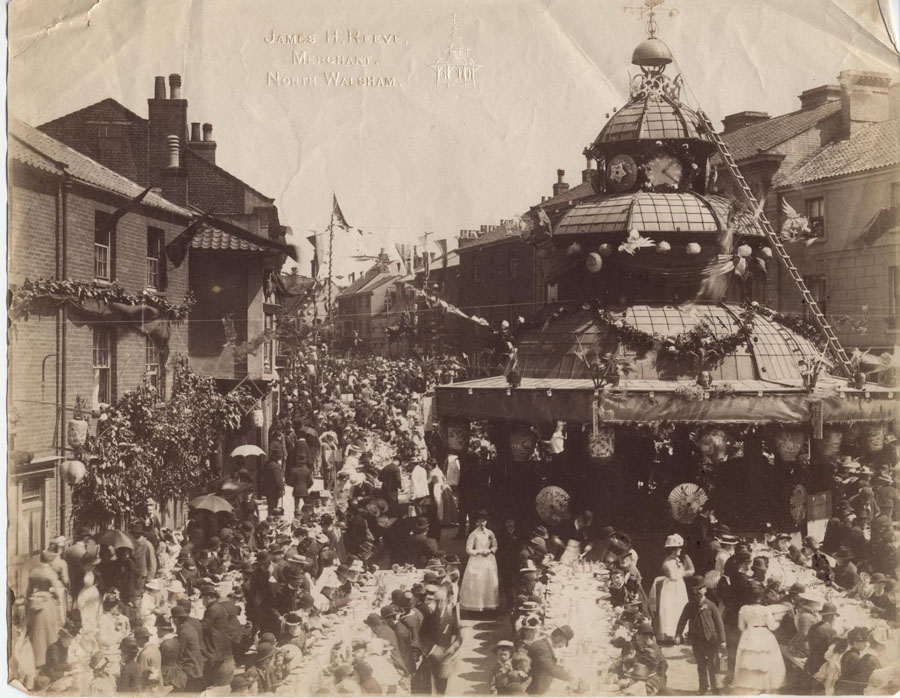 This archive item has been viewed 1720 time(s). 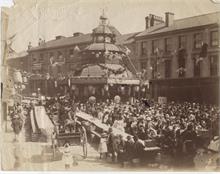 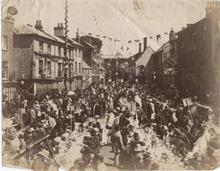 Celebrations for the Golden Jubilee of Queen Victoria in 1887.
Return to North Walsham thumbnails.
More North Walsham photos from...
1887,