Children singing in the Market Place for the Diamond Jubilee 1897.

Queen Victoria's Diamond Jubilee
Extract from the North Walsham Chronicle June 22nd,1897. After the Grand Service at the Parish Church, which the vast congregation filled to capacity, the band played in the Market Place. In the meanwhile the aged poor, the widows and the sick had not been forgotten, some 300 jubilee gifts having been distributed amongst them by the Jubilee Committee.

In the afternoon the scholars of the Board and Sunday Schools, to the number of 850, assembled in the Board School to receive their Jubilee Medals and tickets, after which they marched, in procession, to the Market Place and, being massed there, sang the National Anthem. The procession being reformed they then moved to the rRecreation Ground where, at intervals, they received oranges, nuts, beef patties, buns and toys. During the afternoon a capital programme of Sports was carried out under the management of the Sports Committee and, in the evening, there was a happy and merry gathering of all sorts and conditions of townsfolk on the Recreational Ground; popular entertainments being given in one tent, and light refreshments, supplied at a cheap rate and in an admirable fashion, in another. At 10oclock a huge bonfire was lighted by "the oldest inhabitant" on the ground and, subsequently, a torchlight procession was formed which marched around the town to the strains of the band. So, with mighty cheers, and the singing over and over again of "God Save The Queen"," Rule Britannia" and "Auld Langs Syne", the glorious day ended in a most felicitous fashion.

It remains to be added that the Jubilee Celebrations on White Horse and Spa Commons were carried out with the utmost heartiness and enthusiasm, some 500 of the parishioners sitting down to substancial Old English fare in the middle of the day, and carrying on their festivities with the most loyal enthusiasm until a late hour in the evening. Thus, in whatever direction we look in the parish, we have to chronicle, with sincere pleasure, that everywhere the people were but of one heart and one soul in the matter of thankfulness to God for our Gracious Queens unprecedently lengthened rein, and of loyal devotion to her throne. 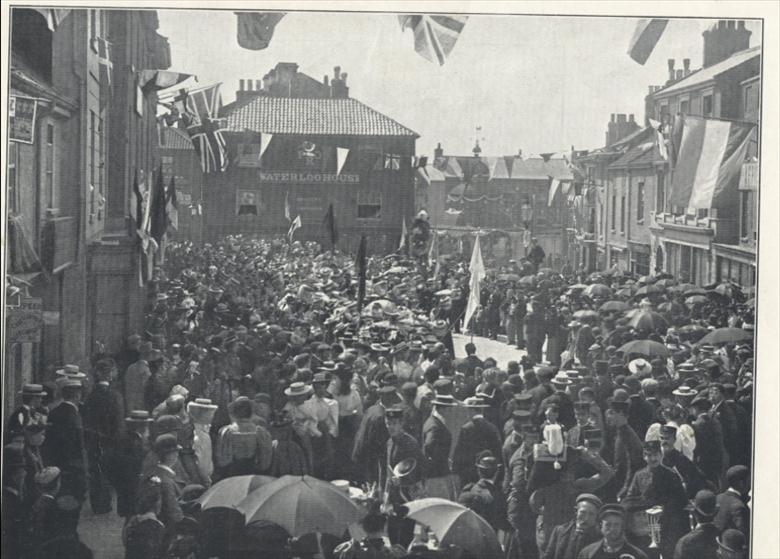 This archive item has been viewed 2521 time(s). 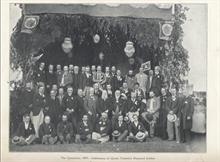 The Committee for the celebration of Queen Victoria's Diamond Jubilee 1897. 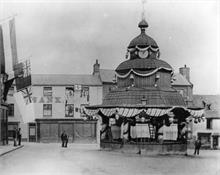