Unveiling of the Drinking Fountain

The drinking fountain was unveiled by Mrs John Wilkinson of "The Oaks" on Thursday, June 20th.,1912 to commemorate the coronation of King George V and Queen Mary on the previous June 22nd, 1911. Following the Coronation Festivities in 1911, 50 1s. 2d. was left over and Mrs. Wilkinson initiated the idea of a drinking fountain. The idea was adopted by Mr John Dixon, Chairman of the U.D.C., who lived in Tudor House on Grammar School Road. Subscription lists were opened and raised sufficient to cover the total cost of 132 14s. 6d.

The fountain was designed by Mr Bernard Gaymer, son of Mr. John Gaymer of Cornish & Gaymers ecclesiastical builders and it was constructed by Mr. George Hammond, a monumental mason on Grammar School Road.

The fountain stood some nine feet high, was surmounted by a powerful gas lamp and consisted of a drinking trough for horses on each side, a basin and cup in the middle and, at the base, a dogs trough.

The community spirit of those days is well illustrated by the immense crowd attending the unveiling. On the left of the gathering are the children of the County Council Schools who sang "God Save The King" and "Heres a health unto His Majesty".

The fountain was removed about 1922-24 and stood for many years, neglected, on the boundary between the M & G.N. railway station (now the by-pass) and the old Holborn Tyres site before being renovated and replaced in front of the Market Cross in 1972. Regrettably the Lions head spouts were stolen by selfish theives or vandals.

It was again removed during Market Place improvements, during which time it received the attentions of Nick Hindle, a local mason, and was replaced, on July 23rd. 2001, on a specially made plinth just 12 feet from its original position.

An article, written by Mike Ling, finished with the words "It would be nice if, one day, it were to regain its lions head spouts". The words were read by Alby Crafts sculptress, Helen Dixon, who had lived in North Walsham, and who offered to sculpt the new heads. Fortunately, an anonymous benifactor was found and the 525 cost was covered. By October 2007, the fountain had been cleaned and the lions heads reinstated. 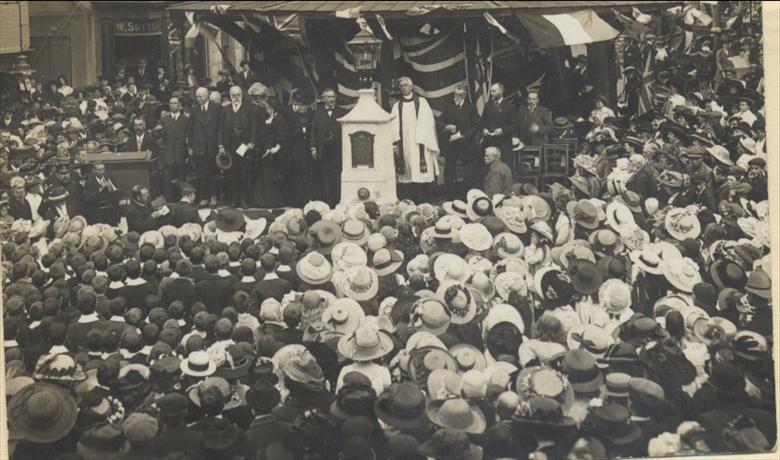 This archive item has been viewed 2749 time(s).