Duncan Industries Engineers Ltd. Ian Duncan standing before a Duncan Dragonfly with a Duncan Healey in the background at Swannington. - North Walsham Photograph

Duncan Industries Engineers Ltd. Ian Duncan standing before a Duncan Dragonfly with a Duncan Healey in the background at Swannington. - North Walsham Photograph

Norfolk's First Motor Industry
In mid 1946 engineer Ian Duncan moved to North Walsham, ostensibly to build canning machinery for his brother, Albert Duncan, who had set up Duncan Canning on Norwich Road.
Once established in town, Ian Duncan set about his intention to build his own car (or buggy, as he called it), and, gathering a team around him, he took over his brothers Park Hall on New Road to form Duncan Industries (Engineers) Ltd. The first job was to organise a machine shop. The premises were in a poor state and needed considerable attention but, as David Rogerson, the works manager recalls, the worst job was to dispose of several tons of curry which had gone off!
Whilst building the Duncan Healey, Duncan Alvis and Duncan Drone, work progressed in secret for Ian to produce the first mini car. The principal designers were Alan Lamburn (who had previously worked on the Fleet Air Arms Barracuda aircraft) and Frank Hamblin (who had helped develop a heat exchanger for the Gloster Meteor, Britains first operational jet. Both had considerable pre-war experience in the motor industry and the teams efforts resulted in the Duncan Dragonfly.
The summer of 1948 saw the light blue prototype become a familiar sight on the roads around North Walsham and Norwich as Ian Duncan was anxious to cover as many miles as possible so that any shortcomings in the design would soon become apparent.
Alas, the success was short lived and, as seen under the text for Duncan Dragonfly the company went into receivership and the Dragonfly was sold to Austin to help settle debts. North Walshams claim to fame in the motor industry finished at the end of 1948 and the town lost a very talented team of engineers.
Ten years later, in August 1959, Austin introduced another transverse engined, front wheel drive car with rubber suspension, the same constant velocity joints and the same ten inch wheels from the original Dunlop pressings Alec Isigonis Mini.

This archive item has been viewed 4932 time(s). 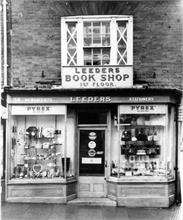 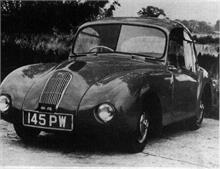