The print was published by "Loads & Sons" in Market Street in April of 1923. The text on the reverse side of the print reads...

Sir / Madam,
Further reminiscences of the past, as promised we have pleasure in handing you with this letter a quaint picture of a corner of this Ancient Town as it was when our business was founded nearly eighty years ago.
The House on the right in the foreground now the High School (portions of which are the oldest in the Town) was probably erected just after the great accidental Fire in June 1600, which nearly destroyed the whole Town, consuming 118 housees with about 500 barns, stables, and other buildings to the value of £20,000.
The Tavern on the left in the picture was the old "Bear," then the principal hotel of the Town and where the Magistrates' Sessions were held.
On the right "The Feathers" the old Coaching Hostelry, formerly known as the Dixie Inn, and still earlier was the Prison. The large cellars of this house Contain five Dungeons in a good state of preservation; at the Gable angle of this and adjoining house were placed the Stocks and Pillory, here "they made the punishment fit the crime."
The two shops in the centre of the picture show the old "Bow" windows which were usual everywhere in the 18th century and now the only ones remaining to remind us of the manner in which our forefathers built their dwellings two hundred years ago.

With compliments, we remain,
Your obedient servants,
Loads & Sons 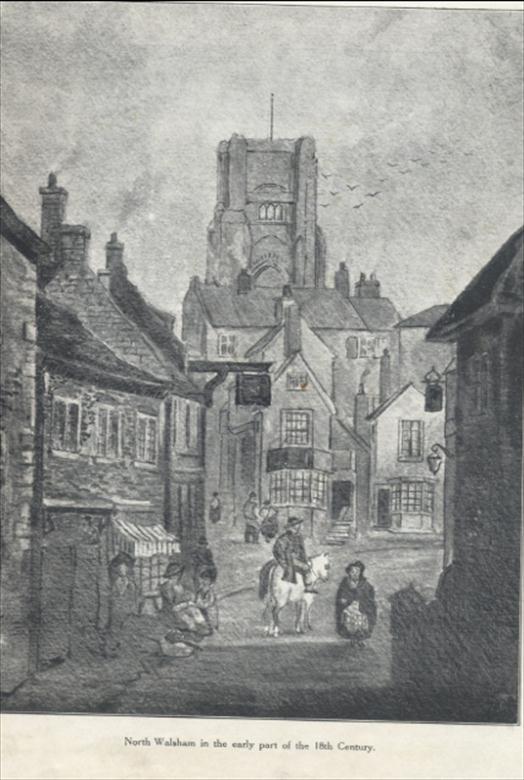 This archive item has been viewed 3785 time(s). 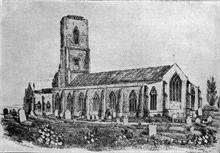 Nth. Walsham's Parish Church showing the tower between the falls of 1724 and 1835 (RML collection) 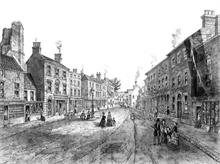