This was the best known "Grocers, Wine & Spirit Merchants" in the town, and the last survivor. In the photo taken at Christmas time, not too long after the war, Mr Laws, the manager, is using the "Bacon Slicer", Mr Rackstraw is at left rear by the newly arrived frozen food chest. Half way along the right hand side is Denis Allen, the Warehouseman, wearing his coat of the same name.
The grocers of the time worked in a completely opposite manner to the supermarkets of today, who break down the bulk off-site and supply everything packaged ready for sale.
The description that follows shows how the commodities that arrived by lorry were broken down by hand to be in a suitable state to be on the shop counters.
Cheese came in a wooden crate containing 2 rounds 40cm diameter x 40 deep. The first job was to remove the cheesecloth from the rounds, which was very hard work.
Butter came in 25kg blocks and Lard in 12.5kg blocks.
These 3 items were all then cut up using a wire with wooden handle at each end (the wires did occasionally break!)
Dried fruits, sultanas, raisins, currants and dates all came in 25kg wooden crates.
Dates were in 4 layers with greaseproof paper in between. Before they were ready for sale, they had to be broken down by hand to single dates.
Valencia Raisins had the seed removed by a machine similar to a hand mincer.
Sugar originally came in 2cwt sacks (100kg), which unsurprisingly eventually broke the sack barrow, later in 50kg paper sacks.
Apart from the cold meats, which were cooked on the premises and were a Rackstraws speciality and the wine and spirit, most of the serving was done by the ladies, in their smart white overalls. When they were not busy serving they spent time behind the scenes packing telephone orders in cardboard boxes for delivery in town and village, and sugar packed in the iconic blue packets.
They did like to show their skill in slicing up butter from bulk into 341b blocks with a wire and board, check-weighing and patting with grooved paddles to provide the iconic corrugated pats, before wrapping in greaseproof paper. Another job, which was done in view of the customer, was the grinding of the coffee beans, which were loaded into the hopper, check-weighed and packed into brown paper bags pre-printed "Rackstraw".
When the customer had all that they required the assistant moved to one of the wooden tills. The value of the sale was entered on to the paper roll before the till was opened with a crashing noise.
A customer recalls that Mr Laws always presented the cheeses in an optimum state of maturity. (He did however, from time to time, "borrow" cheese from the Co-op over the road). She also recalled that there was always a chair to sit down on. Mr Laws kept an eye on the situation and when the customer was ready would tap on the counter and call "Service", which was followed by the sound of footsteps.
Rackstraws closed in 1979, having been bought by G.C. Harvey of Ber Street, Norwich. They were followed by Peatling & Cawdron (Greene King), who traded into the early nineties.
Thanks to Denis Allen, who started 13/09/1946, Janet Wesby and Sandra King - in her later time the uniform was a blue tabard.
Lord & Lady Wiggens of Paston Hall spent several months of the year at their hunting lodge in Scotland. Their guests, some from overseas, were impressed with the condition of the cheeses. Where can buy? Rackstraws of course! 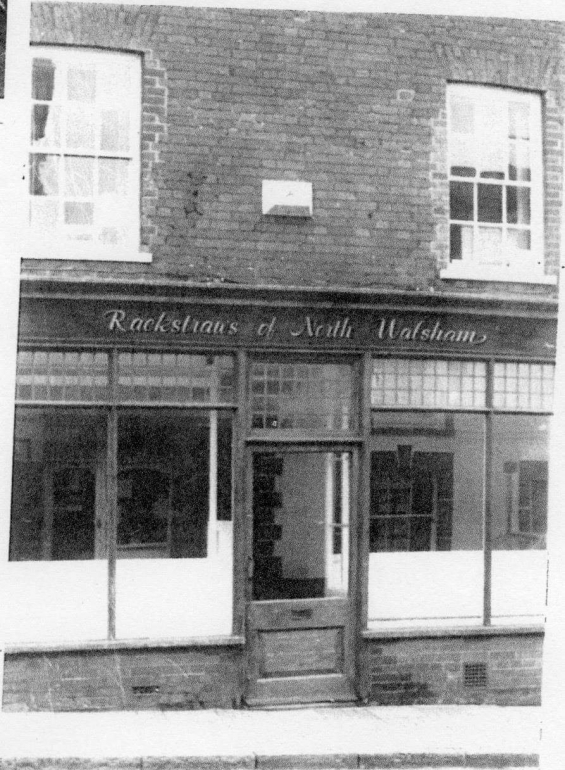 This archive item has been viewed 525 time(s). 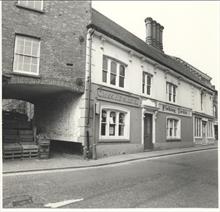