The North Walsham Catholic Church
In 1902 it seems that North Walsham only had one Catholic parishioner Frank Augustus Loads of Loads & Sons, Market Place who was a convert from Wesleyanism. In June 1903 Mr Loads married Miss Sara Monica Mary Durrell, the daughter of an East Ruston farmer who was also received into the church. The first mass in North Walsham was said in the drawing room above the Market Place shop in 1904. About this time Mr. And Mrs Loads would attend Sunday Mass at Cromer by pony and trap, cycle or, later, car, although his driving was said to be somewhat erratic.

In 1912 Mr Loads made a pilgrimage to Rome and obtained the blessing Of Pope Pius X on the proposed permanent church in North Walsham and he brought back a picture of "Our Lady in Perpetual Succour" which was placed in a small chapel opened that year in a room above a garage at the back of the Market Place shop (see picture).

Throughout the 1914-1918 War many Catholic soldiers were stationed in the district and Mass was sometimes said in the yard outside Loads shop (now Market Cross Mews) where straw was put down for them to kneel on.
In 1926 the Rev William Arrowsmith (DD, MC, MA) was appointed the resident priest, although the only resident Catholics comprised of some 12 people. Which included Mr and Mrs Godfrey who may be remembered for their later Primary School on Millfield Road. At this time Mr. Godfrey was teaching Latin at the Paston School. They were also part of the North Walsham cricket scene where, for many years, Mr. Godfrey was umpire and Mrs Godfrey scorer.

In 1928 the Rev Austin Snowden took over and, in 1929, the Church Building Fund was started with Mr and Mrs Loads each promising 500. In 1931 Mr Loads bought the 2.75 acre site on Kings Arms Street which was behind his house at 4 Norwich Road. In June 1934 a contract was signed with Messrs Cornish and Gaymer, the famous ecclesiastical and General builders of the Millfield Works, Norwich Road, North Walsham, for 3,547 and building commenced in that month with a stone-laying ceremony on August 30th by the Rt. Rev. Laurens, Bishop of Northampton. On April 4th, 1935 the Church was opened (during an unexpected snowstorm) and Mr Loads received the Bene Merenti medaille in recognition of all his work and generosity in establishing the new church in North Walsham. Sadly, Mrs Loads, aged 78 years, died just two months before the opening.

The new Catholic Church of the Sacred Heart of North Walsham was one of the last projects completed by Cornish and Gaymer before the firm closed. Curiously, it was not until June 22nd, 1990 that the Church was consecrated by Rt. Rev. Alan Carol Clark, First Bishop of East Anglia.

The Church is still thriving and a splendid Church Hall was opened on October 27th 1999 by the Rt. Rev. Peter Smith, Bishop of East Anglia. 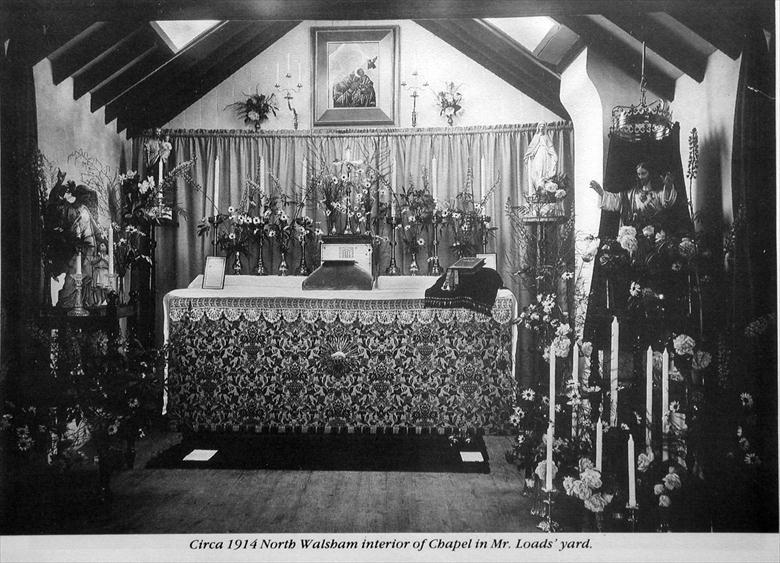 This archive item has been viewed 3683 time(s).