Starling's Garage, Norwich Road, North Walsham
This photo of around 1924 shows a "Dennis" tanker lorry, its hard tyres and spoked wheels reminiscent of the age of steam, making delivery of Pratts Spirit.
By the front wheel is the driver, Charles William Christmas Smith who was the first Esso dealer in the district at Chobham and who moved to Millfield Road, North Walsham in 1920. At the rear is his assistant, Bob Lankaster, and, at the first floor window is Sid Croft, clerk to Starling's Garage.
The building behind the tanker was erected at the end of WWl by Frank Mann who had previously had his garage and coachbuilders business in Vicarage Street. Behind the facade was a listed wooden building the roof of which had been a hangar roof at RAF Bacton, a night time airstrip used by the Royal Naval Air Squadron biplanes from Yarmouth between 1915 and 1918.
Starling started his business in the building on the far left, about 1900, as cycle engineers which, like many, expanded to become motor engineers. They took over from Frank Mann in the early 1920s and ran the business until about 1933 when it was bought by Harmer and Scott. After the death of Billy Scott, the business was run, under the same name, by Francis Webber and Romney Karop until the 1980s.
Later it became Holborn Tyres. This business lasted until gales irreparably damaged the wooden building and the whole garage was demolished in April 2007. 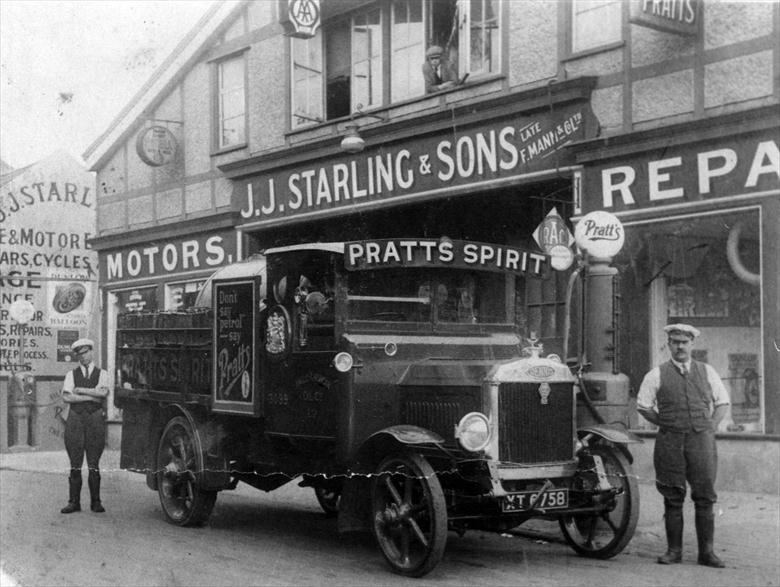 This archive item has been viewed 3355 time(s).