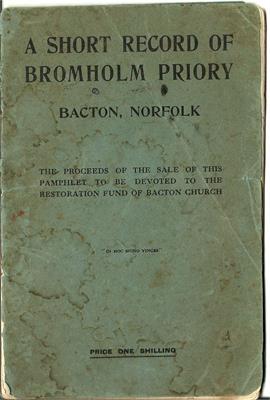 A SHORT RECORD OF BROMOLM PRIORY
BACTON, NORFOLK
THE PROCEEDS OF THE SALE OF THIS PAMPHLET TO BE DEVOTED TO THE RESTORATION FUND OF BACTON CHURCH


A SHORT RECORD OF BROMHOLM PRIORY
BACTON, NORFOLK
THE PROCEEDS OF THE SALE OF THIS PAMPHLET TO BE DEVOTED TO THE RESTORATION FUND OF BACTON CHURCH
"IN HOC SIGNO VINCES"
1911


PREFACE
In this present age, when thinking people are turning attention to the traditions of the past as a great help to our artistic sense, special note may well be made of the architectural beauty of the ruins of old priories and other religious houses scattered about England, amongst which Bromholm Priory holds high place, both from an historical as well as an architectural standpoint.
From a survey of these old ruins one gathers what a vast amount of unselfish zeal was put into the work of these old master builders, and one feels how these sanctuaries must have helped those who lived under their shadow towards a greater reverence for holy things—a reverence sadly lacking in many places now.
This little book, written to assist the visitor to an interesting examination of the ruins, is divided into two parts. The first treats of the architectural features, and the second of the historical records relating to this most interesting old priory.

"But wender to Walsingham, and my wif Alis And byd the Roode of Bromholm bring me out of dette."