You are here: North Walsham & District Community Archive / Other Stuff!! / In the Press / North Walsham Past & Present / DOMESDAY

The first detailed records we have of the Norfolk countryside come from a survey made in 1086 on the instructions of William the Conqueror. Blomefield's translation of the entry for North Walsham, reads as follows: The principal lordship of this town was given by Streth, a Saxon, to the abbey of St Bennets' at Holm. At the survey the abbot has 3 carucates & 1/2 of land, held by 12 villeins and 5 borderers, 2 carucates in demean (demesne) and a 1/2 among the tenants, & 5 acres of meadow, a mill, one runcus, a cow, 31 socmen had 3 carucates and 50 acres, with 2 virgates & a bordar; there were 15 carucates and 4 acres of meadow valued at 100/-; it was 1 leuca & 1/2 long and 1 leuca 6 perches broad, paid 18d geld and the church was endowed with 30 acres.

The abbot also had 4 socmen with 57 acres and a carucate and an acre of meadow valued at 5/8, of 2 of these William Malet had the protection only, and there were 10 bordars with 7 acres valued at 10/-. Such an array of unsorted economic information needs further translation and comparison with other areas in order to judge the relative status of North Walsham in 1086. H. C. Darby's "Domesday Geography of Eastern England" is the best tool for those who wish to delve more deeply.

Briefly what is indicated is that the parish was held by St Benet's Abbey, there were many later clashes between abbot and townsfolk, that the land was worked by a dozen feudal villeins, peasants bound to the soil yet still substantial peasants. The borderers (bordarii) were less free than the villeins but not slaves, they and the villeins owed feudal homage to the abbot. The socmen were economically independent peasants who went for justice to the abbot's court and are an indication of Danish influence in the area. The measurements of land was often in terms of what could be ploughed in a day with a team of oxen, varying according to local custom, type of land and field system. There is some meadow land recorded, probably in the Ant valley; this was very valuable for grazing. The reference to the mill was almost certainly to a water mill on the Ant, as windmills were not built in this country until later. Finally the geld was a tax of 20/-levied on the Hundred of Tunstead, North Walsham's share being 18d or 7f% of the total whereas it occupied 10. 97% of the land area, indicating that it had not reached its later importance in the 11th century.

Lyngate was recorded separately in Domesday. "Earl Warren (de Warenne) had lordship here-2 freemen deprived-105 acres, 1 villein and 4 bordars, 2 socmen and 4 1/2 carucates, 3 1/2 acres of meadow, pannage for 4 swine(enough woodland to feed), a mill valued at King Edward's (the Confessor) reign @20/-, @ survey 40/-. Abbot of St. Bene't had Soc and commendation or protection of freemen before the Conquest." (Blomefield) 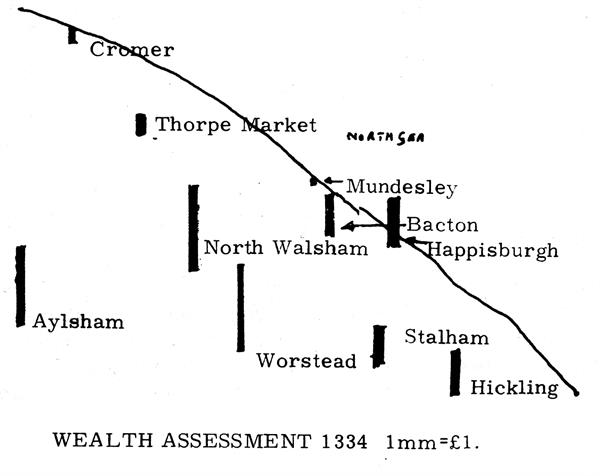 This indicates that the woodland was on the northern edge of the parish and that the Norman invaders were increasing their feudal grip on the district by depriving freemen of their rights, usually a method of having the peasantry reduced to villein status.

The abbot controlled much of the parish, was the legal arbitrator for most of its inhabitants and had control of the market, of great importance in later years.

The growing importance of North Walsham can be seen in the map of wealth assessment based on the survey of 1334. Only Worstead and Aylsham were true local rivals by that date, when the wool trade had grown.

The lack of woodland for swine pasture indicates that deforestation was much more advanced here than in many parts of East Anglia. The total numbers of people mentioned referred only to economically active males so that an estimate of population must multiply the numbers by 4 or 5 to account for women and children and others not mentioned.