You are here: North Walsham & District Community Archive / Other Stuff!! / In the Press / North Walsham Past & Present / FARMING & LAND USE 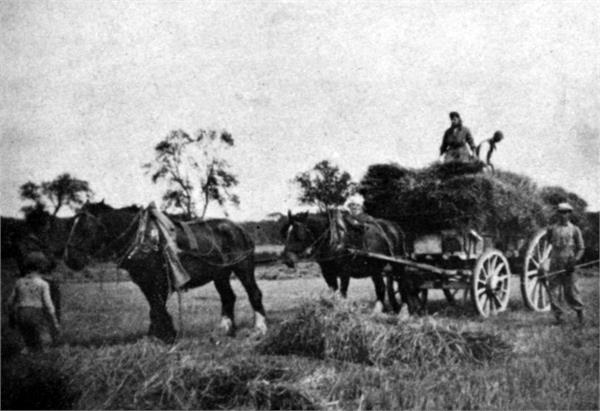 Farming in North Walsham parish, as Domesday and the market records show, followed the normal arable pattern for East Anglia in the Middle Ages growing cereals, peas and beans as well as keeping limited numbers of livestock, but no sheep are mentioned, poultry and fish in the abbot's ponds. The agriculture was intensive for the period. Millfield and Northfield are names reminiscent of the large open fields around the town. There was an area of rough grazing to the south of the town, North Walsham Heath and the commons to the north east were less productive. The meadows were highly prized and are recorded separately, these being in the Ant valley. Oxen were the usual draught animals until the 17th century when horses became commoner for heavy work. Also in that century the traditional crop structure started to change as root crops were introduced, replacing the fallow. As population grew, a greater number of landless countrymen had to be accomodated in the community and Arthur Young's writings indicate that as Enclosure approached, so conditions for the poor on the land were worsening, although the landed rich were benefitting greatly from the new husbandry.

The latter farm was typical of the successful new Norfolk Four-Course farm of the period and those who were rich were in a position to buy out their poorer neighbours. Full Enclosure by Act of Parliament followed in 1811, much of the new activity being in improving Bluebell and Spa Commons about 1820. Prosperity for the farmers,if not for their labourers,followed this activity and continued until the 1870s, when a combination of cheap grain imports and several poor harvests wrecked the farmers' "economy. When Sir Henry Rider Haggard carried out his survey of rural England in the 1890s he reported Mr Learner of North Walsham as saying:In the old days corn paid for the wages, the root crop the landlord, but things were changed. How many farmers, existed was a mystery and that there was still a demand for farms was another. This was partly explained however by the fact that only 3 people in the North Walsham district were what he called legitimate farmers. Nearly all landholders there had a trade which they combined with their farming-builder and carter. Rents were £2 per acre plus tithe(before 1873)-now £1 minus tithe. One could buy now(1899)at £25 an acre, it used to be £50 to £60 per acre."

The First World War improved farm profits and afterwards the encouragement of cereals and sugar beet under government schemes helped keep farming off the rocks.

A closer analysis of these figures shows a remarkable increase in the built-up area, mainly in new industrial estates to the north west of the town and new housing estates all round the town. Much of the industry is related to the agricultural nature of the area, agricultural engineering, milling, canning etc. although there are a variety of other light industries. New housing is of low density, typically bungalows, which are great consumers of farming land. Recently (1972)an acre of land in the parish was sold for £28,000 for development, which indicates the enormous pressure on agricultral land. Most of the parish has been classified as Grade 2 Or 3 by the Agri-r cultural Land Classification of England & Wales, which is high grading.

Other changes which have occurred are the slight reduction in woodland, partially to offset the depletion of agricultural land caused by housing developments. Market gardening has increased rapidly since the 1930s. Cabbages,peas,brussel sprouts,potatoes, strawberries, blackcurrants, raspberries, blackberries, apples and nursery plants are all grown.

The best known North Walsham nursery is that of E. B. Le Grice(Roses)Ltd started in 1920 by an ex-Pastonian. Originally he had 10 acres of land, cropping 2 with his favourite plant, the rose. With a shed and a glasshouse and hothouse plus a boy to help, the business became well established.

Great expansion came from 1960 onwards. A new packing shed and glasshouses were erected, 45 acres of land bought on Norwich Road in 1963 and much new building from 1970, including 19 plastic houses.

Mechanization by using planting machines and sprays has enabled productivity to be increased fourfold so that now 5 or 6 men can plant 25, 000 roses in a day. Heading back, budding, fertilizing and spraying are all mechanized now.

Mr Le Grice has introduced 75 commercial varieties of rose in his long and productive life, brought rose hybridization to a fine art in his specially built hot houses and is a regular prizewinner and lecturer on the subject of roses. Duff fruit farms and Hadfields market gardens for vegetables give North Walsham a very balanced industry.

Many hedgerows have been removed, both to facilitate the use of large machinery in arable farming and to increase the size of individual fields. A large acreage is under wheat, which is usually milled, and under barley which is malted or made into animal feed. However an increasing acreage in tfee southern section of the parish is under maize, usually used for silage in Norfolk as it rarely ripens. The now traditional local root crop is sugar beet which is refined at nearby Cantley. A few cattle, pigs and chickens are reared and seaside donkeys are grazed in winter, but there is relatively little land under pasture, usually poorer qualify land or that adjacent to the River Ant.

Production tends to be intensive, 2 tons of grain per acre being normal yield now, with maximum use of machinery, fertilizers and pesticides, which typifies the general efficiency of farming in the area. 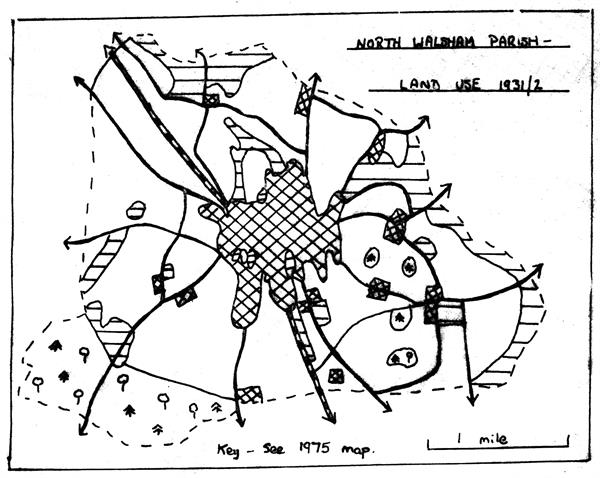 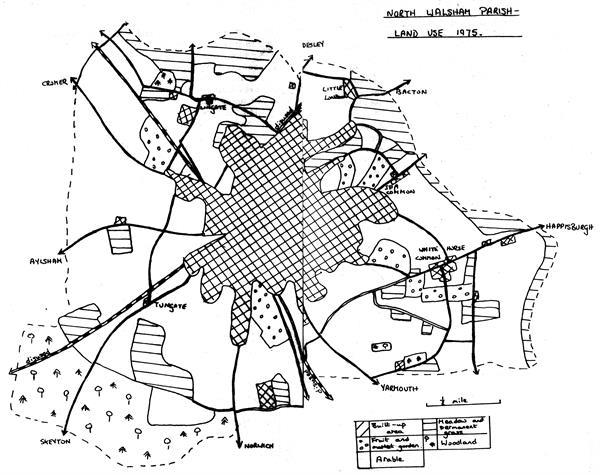